Punting, passing and dodging may be winning strategies on the sports field. Yet when it comes to tackling the California drought, the University of California, Los Angeles (UCLA) goes for head-on approaches. The University’s latest move is expected to save more than 6.5 million gallons of water annually.

UCLA scored big when it replaced the intramural field’s grass with artificial turf. In water-starved California, this is a major victory. 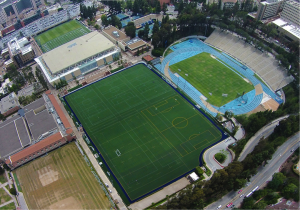 “Artificial turf was a perfect solution for this field with its heavy use and location on top of a parking structure,” says UCLA Chief Sustainability Officer Nurit Katz. “The field was closed for turf maintenance and reseeding often before, and now students can use it year round. Artificial turf has been an important complimentary strategy to our main turf-reduction focus on drought-tolerant landscaping projects, which support local biodiversity.”

Even so, it is just one of UCLA’s sustainability initiatives tied to sports and recreation. The university is a member of the Green Sports Alliance and has just created a new position of Sustainability Coordinator for Recreation and Sports venues to lead initiatives like Zero Waste at Pauley Pavilion–the iconic basketball facility.

UCLA battles the drought in other ways too: 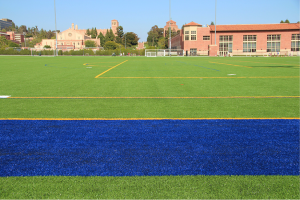 And that’s not all. This year, UCLA will install a water filtration system at the cogeneration power plant, which will save more than 17 million gallons a year and will join the Pacific 12 in a conference-wide water challenge. UCLA’s Chief Sustainability Officer co-chairs the University of California System-wide Water Working Group that will update the UC water policy this year with a new more aggressive target (the current target is 20% reduction in potable water use per capita from the campus baseline by 2020).
About AstroTurf

The AstroTurf® field’s unique backing system is made with rapidly renewable plant material. This biobased backing addresses other sustainability concerns. UCLA’s comprehensive sustainability program reaches beyond water conservation into all aspects of the University.  It’s what helped UCLA attain the 2014 Princeton Review Green Honor Roll’s list of the 21 most sustainable universities in America. 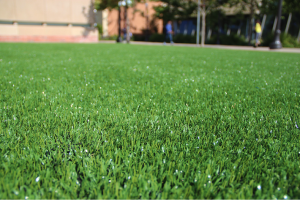 Often called the “miracle bean,” a peer-reviewed life cycle analysis supports that U.S. soybeans can collectively remove from the atmosphere the carbon equivalent of taking 22 million cars off the road in just one year. Each year, nearly 600,000 independent U.S. farmers plant, grow, and harvest trillions of soybeans.