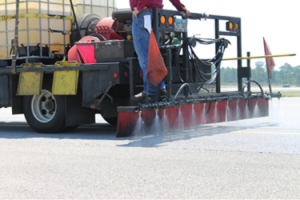 “Saving money by extending the life of an asphalt highway, street, bike path and parking lot is what pavement managers need to be looking at,” says Robert Cummins, newly retired pavement manager for the State of Ohio’s Department of Transportation’s District 7.

“The average life of an asphalt roadway around here is 10-12 years.  But if you use a restorer with soy as its active ingredient right after the asphalt is placed, you automatically extend the pavement life. Further, if you re-treat the same road in four or five years, you add even more life to it.

“It’s cost effective,” says Cummins.  “Even if the cost is eighty-five cents or a dollar a square yard, it pays off if it extends the pavement life an additional two years. If you can extend up to five years, which it usually does, you’re really getting a great return for that investment,” he concludes.

Biorestor®, made by Asphalt Systems, Inc. (ASI) in Ohio, is an alternative to petroleum-based road restorer products. It has a 95% biobased content and uses soy as its active ingredient. Users have found it works in a variety of applications. Some apply the product immediately after laying down the asphalt, some at a later date, and some even use it to “rescue” an older road.

Franklin, Ohio Township Trustee Roger Schultz recalls a product demonstration conducted by ASI’s Michael Freisthler.  “He poured two identical size samples of fine sand — one on a Biorestor-treated surface and another one on an untreated surface. He then took a hockey puck and smoothed the sand into a circle on each area. When measuring the area, it showed the treated sand area covered an area 30 percent larger.  This was due to less surface deterioration on the treated road surface.”

Freisthler explains that according to the National Center for Asphalt Technology, surface loss, or ravel, is the first sign of pavement failure. The demonstration he showed Schultz is actually an ASTM 965 Pavement Macro Texture test used in comparing pavement treatments and untreated pavements surfaces.  Because ravel is the first sign of failure, this test helps determine the effect Biorestor can have.

In Ohio’s Auglaize County, German Township Trustee David Albers says that in his area asphalt that is treated with the sealer develops fewer cracks. “That means that when you completely resurface the road later, there are no cracks that show and eventually surface in the repaved road. By following this procedure, we can make asphalt roads last for up to 20 years.”

“Two other aspects of Biorestor we like, in addition to the fact it works, is that it’s less toxic to the environment than petroleum-based sealers and it’s made using soybeans that grow right alongside the very roads it protects. We think it’s great that we can support our many local soybean growers,” says Albers.

Hundreds of miles south at The Villages, Fla., District Property Management Director Sam Wartinbee has returned to using Biorestor on the community’s 120 miles of roads plus golf cart and walking paths.  For many residents, a golf cart is the main mode of transportation. The Villages administration had used the product in the past, switched to a non-biobased product and found they preferred Biorestor, according to Wartinbee. 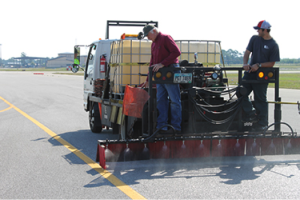 Biorestor qualifies for mandatory federal purchasing because it meets the requirements of the USDA-designated biobased category for asphalt restorers and the product also carries the USDA Certified Biobased Product label.
Biorestor is available on the GSA Schedule: GS-21F-132AA
For more information, go to www.biorestor.com or contact Michael Freisthler at mike@asi-road.com or at 888-743-7319.