Finding alternative forms of renewable energy is a priority these days, and Technology 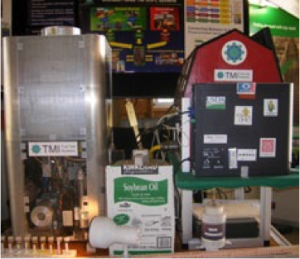 Management, Inc. (TMI), with help from the Ohio Soybean Council (OSC) and the soybean checkoff, is looking at new sources of electricity. One project was a 1kW, farm scale fuel cell system that created electricity from soybean oil.

A fuel cell is like a battery that runs on fuel and air. The battery never runs out as long as you continue to provide fuel and air. The fuel cell system from TMI mixes soybean oil with steam in a catalytic chamber called a steam reformer. The steam reformer is heated by the hightemperature fuel cell exhaust and converts the soybean oil/ steam into “syngas,” a gaseous mixture primarily of hydrogen (H2), carbon monoxide (CO), and carbon dioxide (CO2). The hydrogen and carbon monoxide in the syngas react electrochemically with oxygen in the fuel cell stack to produce water, heat and electricity.

“Our goal is to have the system run for many years like a major appliance with minimum maintenance,” says Benson Lee, president of TMI. “The heart of the system is the fuel cell, which produces electricity as long as fuel and air are provided. The target replacement life for the fuel cell is over five years.”

Because the features of fuel cells systems are so unique and different from comparable devices, we envision end users finding entirely new ways to use energy, says Lee. TMI’s market entry system is a 1-kilowatt modular system, designed to be used alone or as energy building blocks for integration with conventional applications. In multiples they provide more power and redundancy. In idle mode, they produce less power. Because the system is scalable, other building blocks in different sizes are anticipated as the market and new applications evolve.

“Wind, solar, hydro, wave action and even engines modified to operate on biofuels cannot operate either continuously or indoors,” says Lee. “Fuel cell systems can provide clean energy anywhere and anytime electricity is needed, as long as fuel is available. We expect to see exciting new markets begin to take off.”

The TMI system operates on both liquid and gaseous fuels and is designed so one person can site, operate and maintain the system, with no special tools, equipment, advanced training or parts inventory. A complete system currently weighs less than 100 pounds with field-test systems expected to be lighter and 40 percent smaller. For more power or redundancy, systems can be connected in parallel and then unplugged for maintenance, transport or to change fuels. This allows fuel backup or simultaneous operation of systems, with each using a different fuel.

Next steps include designing systems for volume manufacture and assembly, then producing a limited number of prototype systems for intensive field testing. TMI is working through the product development and commercialization steps. Given proper funding, TMI expects to beta test product prototypes within two years, with first product introductions within three years.