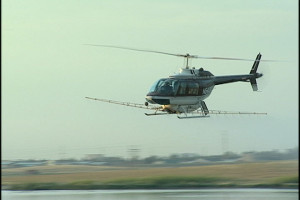 In 2003, the West Nile virus had spread across the United States with the mosquito Culex tarsalis rapidly spreading the virus to humans, horses and endangered birds. Control of the mosquitoes became a priority, and, at the same time, the soybean checkoff began funding research to look at a soy-based larvicide that could help control the mosquitoes.

In addition to the West Nile virus situation, with the development of coal-bed methane in Wyoming, Montana and Colorado, thousands of ponds were being developed that provided excellent habitat for the mosquito. This presented an opportunity for new products to control the mosquitoes.

“What was needed was an inexpensive larvicide that would be efficacious, nonlethal to other insects and animals, safe and easy to apply, and publicly acceptable,” says Al Young, toxicologist and soybean checkoff consultant. “A biobased larvicide made from soybeans would be readily acceptable to the public, and, with the rising cost of oil, economically feasible.”

Young has partnered with the Stepan Company and BVA Oils as industrial partners to develop a methyl soyate larvicide. Soy was chosen as an ingredient due to the quality and availability of methyl soyate.

“The emulsified methyl soyate larvicide has shown to be superior to oil-based larvicides,” says Young. “It provides good control (about 90 percent to 95 percent of larvae), and it is less expensive than current mineral oil used by BVA Oils, but, most important, the soy-based larvicide is safe to apply and has almost no effect on nontarget organisms.”

The product has been tested extensively over the years. The first field tests were conducted in 2004 in coal-bed methane ponds in Wyoming, but to be economically feasible, the larvicide had to be tested in recreation ponds, municipal drainage and sewage ponds, and other ponds. However, the next two years had low populations of mosquitoes in Wyoming. Field tests in the summer and fall of 2007 confirmed a modified Stepan formulation was available to control over 95 percent of the larvae. In July 2008, more tests were done using a helicopter to apply the larvicide. Although the initial tests were not as effective as anticipated, the residual film was very effective at the long-term control of over 90 percent of the mosquito larvae. Additional aerial testing is proposed for 2009.

Young says there is a large international market for the control of mosquitoes that transmit malaria and other mosquito-borne diseases. Methyl soyate is an exciting ingredient used in many new industrial Products. For information on Stepan, visit www.stepan.com