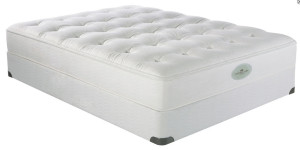 Humans spend about a third of their lives lying on mattresses. In the quilted top layer of nearly all of its mattresses, Denver Mattress uses between one and three inches of soy-based foam. The foam, called BioFlex™ Hybrid Foam, contains Cargill’s BiOH® soy-based polyol. The United Soybean Board (USB) and soybean checkoff provided funding to Pittsburg State University in Kansas to develop the technology that led to BiOH.

“The higher the density, the longer lasting it is,” says Rensink. “And we use a higher density than most of our competitors, giving us a product that maintains its height, strength and firmness.” BioFlex, with at least 20 percent biocontent, represents one more product in which manufacturers have replaced imported fossil fuels with renewable U.S. soy. Compared with conventional petrochemical-based foams, BioFlex requires 61 percent less nonrenewable energy, leads to 36 percent less global warming emissions and will save more than 50,000 barrels of oil per year, according to a third-party life-cycle analysis.

“According to surveys, the American public will buy green as long as the product offers equal quality and price,” says Michael Crowell, vice president of marketing for Flexible Foam Products. “BioFlex offers at least as high a quality as other mattresses, and we have never charged a premium for any of our soy foams.”

Denver Mattress, a Furniture Row company, manufactures its mattresses in the United States and sells them directly through its nationwide chain of retail stores, which it says helps keeps prices low.