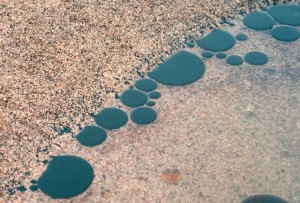 he recent oil spill in the Gulf of Mexico presents a challenge, but soy looks to be part of the solution, and potentially part of the clean-up efforts. Soy-based products represent environmentally friendly potential options to help clean up the oil spill. The United Soybean Board (USB) and the soybean checkoff help fund research for new products and uses for soy.

“The soy-derived ‘biosolvent’ is much better than using petrochemicals in this process because it has much lower toxicity to the marine and aquatic environments, has more effective solvent properties, especially on weathered oil, contains no hazardous petroleum distillates; as a result, it is non-flammable and safer to handle for workers because it lacks the dangerous vapors associated with petroleum solvents,” says Randall von Wedel, founder and principal biochemist for CytoCulture International. The process uses the CytoSol biosolvent formulated with methyl esters of vegetable oils and animal fats, along with nutrients to enhance the biodegradation of residual hydrocarbons. The methyl esters have a strong solvent activity capable of dissolving weathered crude oil from shoreline habitats including marshes. The product lifts and floats the dissolved oil onto the water surface for easier recovery with conventional skimmer and boom technologies. Recovered oil/CytoSol mixtures can be recycled as a fuel, showcasing its green practices even further.

“The amount of soybean oil in CytoSol varies with location and circumstances, but soy methyl esters can constitute over 97% of the product, depending on the most available product in a region” says von Wedel. “We always buy the raw material (B100 or 100 percent methyl esters) from reputable biodiesel plants that meet BQ 9000 quality specifications and blend it into the CytoSol at our local distribution centers.” In response to the potential shoreline effect of the recent oil spill, CytoSol BioSolvent is strategically staged in New Orleans, and available for supply to spill clean up response teams. CytoCulture International has shipped two 275-gallon totes so far: one for decontamination of oiled ships via the Tampa Unified Command and one to CINC Industries to facilitate the thinning of emulsified oil and cleaning the equipment they tested for BP in May. Meanwhile the Coast Guard is reviewing documentation prior to setting up field trials. Another BP Contractor, M-I SWACKO in Houston, is testing the CytoSol as part of their oiled beach clean-up process using huge machines that separate oil from sand. They indicated they would purchase 30,000 gallons of product if the test results are favorable.

CytoSol BioSolvent has helped remove oil from several sites in the past 16 years, including ship cleaning during the final de-contamination efforts and testing it to clean oiled rocky shores on San Francisco Bay during an oil spill in 2007. Most recently, a punctured pipeline in Salt Lake City resulted in spilling 33,000 gallons of crude oil into city waterways and down Red Butte Creek, which connects to the Jordan River and drains into the Great Salt Lake. Chevron Corporation has requested CytoSol drums be shipped to help with the cleanup process. Chevron crews apply the CytoSol to flush crude off the banks of the river with an overflow of water after letting the CytoSol soak in and dissolve, then release the crude oil.

“USB funding helped in conducting Environmental Protection Agency (EPA) and California state marine toxicity studies that allowed the product to be listed on the EPA’s Schedule of Products for shoreline cleaning,” says von Wedel. “The product is licensed in the State of California as a shoreline cleaning agent that can be used over the water.”