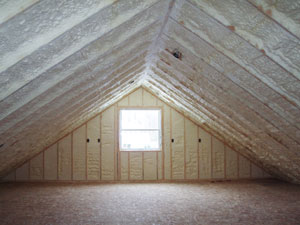 The United Soybean Board (USB) and soybean checkoff support helped fund the development of the Agrol polyol.

BioBased 501, made by BioBased Insulation, is the residential and commercial soy-foam insulation that is currently being tested. It is an open cell insulation that can be applied to the walls and attics of homes and can help homeowners save energy.

Application of the foam in the attic of the Habitat for Humanity house required approximately three hours of a two-man crew with trailermounted equipment, plus two hours for preparation and clean-up. The wall-application step, which was done with the same material a month earlier, required approximately 10 hours on site, including trimming of the foam flush with wall studs, an operation not required in the unfinished attic.

The insulation reduces air leakage, fills in cracks and crevices, and provides better indoor air quality than traditional insulation. The insulation is spray-applied by certified dealers trained in the application. BioBased 501 expands up to 100 times its liquid volume in 10 seconds, allowing it to fill in all gaps and possible sources of infiltration. This creates a sealed thermal envelope which helps save on energy costs.

“Most spray-foam insulation systems use petroleum-based polyols,” says Porter. “In order to create a more sustainable product, we use biobased polyols, such as Agrol, whenever possible.”

The insulation at the Habitat for Humanity house will be subjected to a blower door test to determine effectiveness of the low-density open cell foam as an air infiltration barrier. The test data will be compared with the higher density closed cell foam system demonstrated last year and with other competitive materials in similar standardized structures. Thermal testing of the previously prepared 8-ft.-by-8-ft. standard wall section will be conducted in the weeks ahead, followed by moisture uptake testing over an extended period.