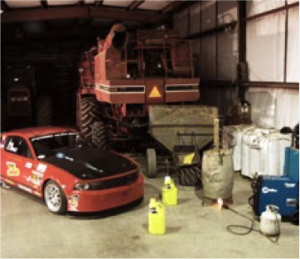 components of the car that owner Brent Hajek helped grow on his northwest Oklahoma farm. Some of the technologies incorporated into the car were developed with funding from the United Soybean Board (USB) and the soybean checkoff. Hajek read about soy plastics developed for agricultural combine panels in the USB-funded magazine Beyond the Bean , which got him interested in soy-based materials for his cars. Hajek began talking with Debbie Mielewski, Ph.D., of Ford, who worked with USB to develop soy plastics and soy foam for use in the Ford Mustang.

“I thought if the panels were strong enough to go on a combine, they should be strong enough for a racecar, and I wanted to use a product that I and my neighbors grow,” says Hajek. “I saw this as an opportunity to help promote soy-based products.”

The Ford Mustang that Hajek races includes a hood, front fender and front fascia made of soy plastics, seats and safety equipment made from soy foam and also features soy-based paint. Hajek continues to investigate opportunities to use renewable agricultural products on his team and also uses products from corn and wheat, including fueling the car with 85 percent corn-based ethanol.

Hajek Motorsports tested the soy-based panels in wind tunnels against 180-mile-per-hour (mph) winds. However, the real test came on October 11, 2009, when Hajek Motorsports set a new land speed record, reaching a speed of 255.7 mph at Bonneville Salt Flats, Utah. That record was achieved in a 10-mph headwind, so there was almost 270-mph pressure on the soy panels. “The soy-based panels weren’t a concern,” says Hajek. “I felt very comfortable after working with the panels. The panels were as light or lighter and as strong or stronger than steel panels. The soy-based panels met my expectations, and we treated the car just like we would a car made of steel.”

Hajek Motorsports also features a drag racecar that Hajek looks to one day put soy-based panels on as well. In the future, he also would like to expand to a racing truck that would not only feature soy-based products, but also run on soy biodiesel . Hajek has partnered with Ford and Monsanto for technical support.

Hajek will also be featured on a reality TV show called “Growing the Dream,” which will follow the path of soybeans grown on his farm through processing and the creation of soy-based plastic panels that will be put on his racecars. The TV network, nor air dates and times for the show will run have not yet been determined.

“I’m excited to be racing and at the same time promoting the crops I grow on my farm,” says Hajek. “The faster I go, the more people hear about soy-based products, and I like getting that attention for the crops we grow.” To learn more about Hajek Motorsports, visit www.hajekmotorsports.com.