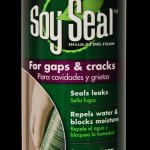 The new canned insulating foam, Soy Seal for Gaps & Cracks, expands to fill and seal a building’s gaps and cracks and prevent air leaks. According to EnergyStar, a joint program between the Environmental Protection Agency and Department of Energy, air leaks caused by gaps and cracks are responsible for 25 percent to 40 percent of the energy used to heat or cool a home. Stopping these leaks with some kind of insulation is the most cost-effective way to reduce home heating and cooling costs.

Soy Seal for Gaps & Cracks sells nationwide at over 700 Home Depot stores for the exact same price as its petroleum-based counterpart, according to Scotty Goodsell, vice president of business development for BioBased Systems.

“Our intention was to go to market with a cost-competitive product. Going “green” no longer costs more, it’s just a choice,” says Goodsell. “And there are performance benefits on top of it, including better cure time and a better barrier.”

BioBased Insulation is also an EnergyStar partner. BioBased Insulation is also developing a minimum-expansion foam that is approved by the American Architectural Manufacturers Association, meaning it won’t void the window or door manufacturer’s warranty. Manufacturing petroleum polyols creates carbon dioxide which is released into the atmosphere. Soybeans take carbon dioxide out of the atmosphere, approximately 2.67 pounds more carbon dioxide than is released in manufacturing a pound of polyol from soybean oil. Comparing the life cycle of typical petroleum polyols with soy polyols has shown a net reduction of carbon dioxide of up to 5.6 pounds for each pound of polyol used. Each bushel of soybeans contains over 11 pounds of soybean oil, enough to make 11 pounds of Agrol which would create over 450 cubic feet of Soy Seal foam.