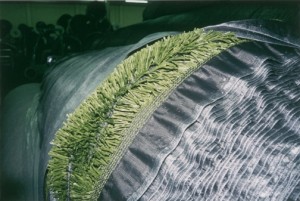 “AstroTurf uses soybeans grown by U.S. farmers instead of oil from foreign countries,” says BioCel marketing director Andy Belles. Soy plays a crucial role in the performance of the turf. The soy polyurethane backing is unaffected by moisture and can be perforated for enhanced drainage. Made from soybeans and postconsumer recycled content, the turf backing has low volatile organic compounds (VOCs).

“The backing is the foundation of any synthetic turf system,” says Belles. “A turf system is only as strong as the backing material that holds it together and BioCel is durable enough for the NFL.” In addition to athletic fields for sports like football, soccer and field hockey, the artificial turf is gaining popularity on golf courses and for residential uses. The BioCel backing system is an affordable alternative to petroleum-based backings.

To learn about AstroTurf with BioCel backing, visit http://www.astroturfusa.com