Why are park architects from Paris to Philadelphia flocking to New York City’s Washington Square Park? NYC Parks’ Landscape Architect George Vellonakis has responded to numerous inquiries from other park planners who want to know more about how he used soy-backed SYNLawn synthetic grass in the renovation of Washington Square Park. 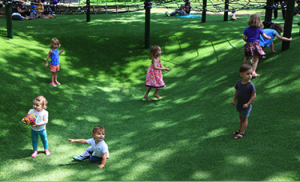 ecent phase of the three-phase Washington Square Park renovation included re-imagining the old asphalt mounds that were installed in the 1970s. Vellonakis, who was tasked with renovating the mounds, said the asphalt was in disrepair and had become a liability and the play structures had long been removed.

Vellonakis designed mounded hills graded and slightly submerged into the landscape to allow for a continuous open meadow.  The area also includes a cable play structure respectfully placed within this restored historic landscape that is now very popular with the children. After deciding that synthetic grass was the way to go because of its low maintenance and aesthetic appeal, he then turned his attention to choosing the right product.

“SYNLawn is the best product out there for use in tandem with an existing green feature — like a lawn – and when trying to coexist with an historic park,” Vellonakis said.  “The color was the most compatible with the surrounding natural lawn and the product doesn’t have a sheen like some others.”

In addition, the renovation included a Leadership in Energy and Environmental Design (LEED)-certified park house and comfort station. “The fact that the backing on the artificial grass is made using soy definitely played a role, as did removing a hardscape,” he said. 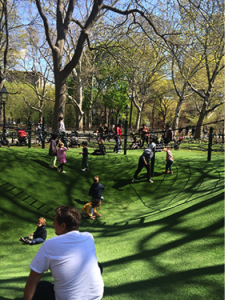 An unexpected benefit of the redesign is the increased family bonding it encourages. “It’s very magical,” says Vellonakis when describing how the park’s famed “Hills” encourage playful interaction between children and their parents or nannies.  “Instead of sitting on park benches observing their children play, adults are out there too – rolling around with their kids.”

Vellonakis says “kids flock to the Hills and really use their imaginations” when tackling the artificial grass-clad mounds.  The unique design allows more imaginative play than would occur on a stationary play structure.  He estimates that on a nice day, between 300 and 400 children visit the Hills.

Vellonakis expects to see additional uses of SYNLawn in New York City as leaders focus on ways to incorporate more green space, especially in low-income communities.  Two parks in Brooklyn – Sunset and Betsy Head – are in the process of installing SYNLawn.  That renovation work is expected to be completed in the summer of 2015.

About Washington Square Park–Located on land steeped in history, Washington Square Park was established in 1827 and named for this country’s first President.  The Park encompasses slightly more than ten acres in Manhattan’s Greenwich Village neighborhood.  The iconic Washington Arch is one of the park’s most recognized features.