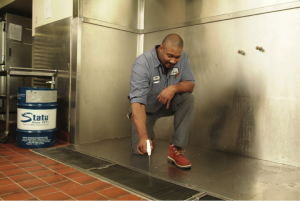 DRAIN CLEANING: Jim Nolan, a long-time employee of USDA’s maintenance contractor, Capitol Technology Services Inc., uses a soy biobased drain cleaner in a South Building cafeteria kitchen. “This product really works,” says Nolan. “It keeps the drain clear, cuts grease and eliminates slime while being biodegradable, non-acidic and non-caustic. Not bad when your major aim is to control the bugs that feed on food scraps.”

Under the umbrella of “environmental sustainability,” the U.S. Department of  Agriculture’s Office of Operations is using biobased products wherever they can to operate and maintain, as well as modernize its headquarters buildings.

“The Office of Operations staff has an ultimate goal of getting the South Building LEED-certified (Leadership in Energy and Environmental Design as described in the guidelines issued by the U.S. Green Building Council). It may take us a few years to achieve this goal as the South Building modernization is a multi-phased project that we started in 1997. But, biobased products have, and will continue to play, an important role in the process,” says Ed Murtagh, an engineer with the Office of Operations. 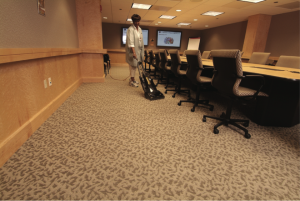 The USDA Headquarters consists of two structures—the South Building and the Jamie L. Whitten Building—across the street from each other on Independence Avenue SW. The South Building, which runs between 12th and 14th Sts. SW, is big. Its seven floors plus sub-basement contain more than 1.2 million square feet of occupied space and more than 2 million gross square feet. There are more than 4,500 rooms or equivalent space and there are more than seven miles of corridors. The building has a capacity for 6,500 employees with slightly more when the modernization is complete.

Meanwhile across the street facing the National Mall, is the older, but smaller Whitten Building. The Whitten Building houses the offices of the Secretary of Agriculture and other top USDA executives as well as a public Visitors Center. It too is continually under renovation. Parts of the Whitten building (its wings) will be 100 years old in 2007.   Biobased products, including carpet made with soy-based backing, have been used in this building.

Thomas H. Hoffman, USDA architect, has specified biobased polyurethane carpet backing for Phase 4 of the South Building modernization, and has already used it in other areas, such as the USDA Operations Center, not included in the previous phases.  They also plan to test and use soy-based paint in the near future.

In the South Building modernization project, Hoffman has used a number of biobased products in the recently completed Phase 3.  “This includes PLA (polylactic acid made from corn) fabric used in the vertical surfaces of work stations in the basement, first and third floors,” says Hoffman. The workstation work surfaces are made of another biobased product, wheat board laminated with plastic. Bio-resins (blended with recycled paper products) are used on some tabletops. 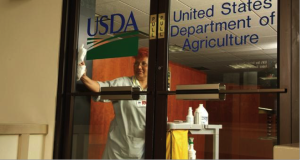 Two other “areas” of the USDA Headquarters facilities are major users of biobased products: The janitorial supplies used to clean the buildings and the pilot project in the cafeteria in the Whitten Building. In the janitorial and maintenance operations, a wide array of biobased products are used, including: non-ammoniated glass cleaner, organic-acid restroom cleaner, neutral disinfectant cleaner, low-odor floor stripper, all-surface cleaner, zinc-free floor finish and peroxide-powered cleaner/degreaser according to Environmental Program Manager in the Office of Operations, Edward Hogberg. They have also decided to use biodiesel (B20) in all of their backup generators at headquarters facilities.

“Our contractors find these materials easy to use, perform well and cost about the same as other non-environmentally friendly products,” states Hogberg.

Randall Fossum, a facility manager in the headquarters complex, uses biobased products in several aspects of his operation including hydraulic fluid in protective bollards. Fossum says he has had very good results from a soy-based solvent degreaser used in the facility’s drains. “Our maintenance people find the degreaser works as well and costs about the same as the products that aren’t as environmentally friendly.”

The cafeteria project was a three-month pilot demonstration conducted in cooperation with the Environmental Protection Agency and the USDA’s Beltsville Area Research Center (BARC) in Maryland. One of the project’s objectives was to determine the   feasibility of collecting and composting (recycling) the biobased cafeteria-ware and fruit-and-vegetable scraps. The ultimate objective was to provide compost for the gardens and
landscape around USDA buildings.

How it all began 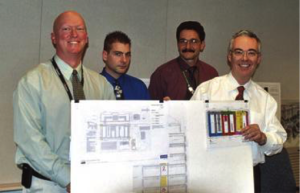 Murtagh said that the Office of Operations has been working towards sustainability in the building for 15 years. “It started with fuel and energy conservation and then expanded to recycling and other preferential purchasing initiatives. So when the 2002 Farm Bill came along with its mandate for Federal agencies to establish preferential purchasing programs for biobased products, we folded those products into the same program,” Murtagh explained.

In addition, Murtagh, Hogberg, Fossum and their colleagues always watch for new and different biobased and other environmentally preferred products when they attend tradeshows and other meetings. “For example, we’re keenly interested in a number of biobased products, including biodiesel, as a result of attending a seminar at BARC.

They’ve led the way and there is a lot any of us in government can learn from their experience,” Hogberg says.