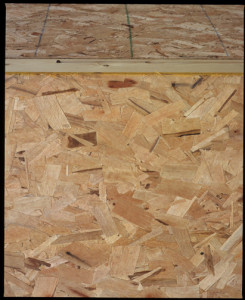 Common wood products such as plywood have used soy-based adhesives for over 70 years. With the introduction of urea-formaldehyde and phenol-formaldehyde resins in the late 1930s, increased water resistance and lower costs were realized compared to older soy products. Increased prices for petroleum-based products, environmental concerns and human health issues have prompted demand for a renewable feedstock, causing a resurgence of interest in the development of new soy-based products for the wood adhesives industry. This led to the United Soybean Board and soybean checkoff funding of research studies into soy-based adhesive alternatives.

Currently, efforts are under way to develop and commercialize an improved waterproof product that replaces phenol-formaldehyde. Kymene/soy flour technology from Hercules, Inc. is being used.

Finely ground soy flour can be combined with other commercially available resins such as phenol-formaldehyde and ethylene discarnate to form wood adhesives, generally by dissolving soy flour in a sodium hydroxide solution. Variations in formulations will result in a wide range of strength and other properties. Additional research will determine the limits of these mixtures and test the performance of resulting products. Early evidence shows promising economic benefits with no discovered problems in performance. Normally these adhesives are for use in the production of wood panels.

The move toward soy flour might someday completely replace formaldehyde in plywood adhesives. The World Health Organization’s International Agency for Research on Cancer (INARC) has designated urea formaldehyde as “carcinogenic to humans.”

Currently, Hercules, Inc., offers a Kymene/Soy Flour adhesive for use in hardwood plywood and particleboard manufacturing. Kymene is a water-soluble product that has been used for over 40 years to add wet strength to tissue and other paper products.

While research continues to determine the limits of these mixtures and to test the performance of resulting products, early appraisals show promising economic benefits with no discovered problems in performance.