Soybean Usage Potential
Updated market studies directed at the coatings industry indicate that emulsion polymers  will continue to grow in a major segment – architectural interior and exterior coatings – once the housing and construction market turns around. The United Soybean Board (USB) continues to fund projects for developing emulsion-compatible systems and feasibility studies for soy polyols in industrial coatings that will reverse the ten-year trend of reduced consumption of soy oil in resins, paints and varnishes, which still constitutes about 14 million bushels of soybeans per year. 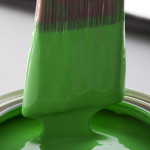 According to the latest census reports for 2010, the paint industry increased in volume 6.5  percent from 2009, reaching 1.13 billion gallons. The architectural coatings segment increased 7 percent from 2009 to 2010, reaching 658 million gallons. The price of paint has been increased to reflect the increase in raw materials and other inflationary costs. The housing and construction industry slowdown is still adversely affecting the total coatings industry, but it has shown slight increases in the last four years from the bottom of the recession.

Current Research Status
Sherwin-Williams is in the final phase of developing a new soy/acrylic architectural coating to meet a VOC content of 50g/l. This product could be commercialized in the 2012-2013 time period.

Rust-Oleum and Sherwin-Williams have been awarded contracts to use soy protein as a new additive. Various applications might include its utility as a binder, filler or rheological agent. Sherwin-Williams is also developing a new family of very low-VOC soy latex emulsions for a family of new paints, in water-based stains and coatings. North Dakota State University is being supported by USB to make modified epoxidized sucrose soy methyl ester resins for thermosetting applications, such as baking enamels, as well
as soy urethane acrylic resins for thermosetting applications and soy acrylic resins for UV-cured systems. They are also evaluating, with Chromaflo Technologies, the utility of soy-derived materials as a colorant dispersant and the technical feasibility of making
novel amide/imide contain soy-based resins.

SFC Consulting, in a partnership with Northampton Community College and Polymer Phases Inc., is in the process of commercial development of a family of modified soy glycerin/acrylic UVcured resins for the graphic arts market.

Iowa State University is conducting a feasibility study to determine if soybean oil plastic fat can be used as a substitute for paraffin and beeswax in a barrier coating for packaging
applications. Celanese is looking at various modifications of soy methyl esters to determine its compatibility and usefulness as a co-binder with vinyl acetate and vinyl acrylic resins.

Project Coverage versus Market Opportunity
Economics and environmental considerations are two key factors driving change in today’s coatings marketplace. Paint and coatings manufacturers are focusing on developing cost effective technology and providing products that both enhance performance and meet government regulations. The researchers have generated broader interest in soy-derived coatings with publication of papers in technical journals and through technical presentations at local and national coatings seminars as well as trade association meetings.

The new modified soy resin being commercialized by SFC Consulting for graphic art printing will allow the removal of Bisphenol A from current coatings. Bisphenol A is a known carcinogen.

The Sherwin-Williams hybrid paint will use recycled PET containers in the manufacture of the resin, thereby reducing the need for disposal of thousands of these containers as well as increasing the level of biorenewable content through the use of soybean oil.

The Rust-Oleum Varathane water-based soy stains will replace solvent stains without sacrificing performance, and they will be more environmentally friendly and easier to clean up after use.

The Reichhold soy-based traffic paint can reclaim what once was a major market for soy-based solvent traffic paints. Acrylics have captured 90 percent of this multi-million-pound paint market due to the more environmentally friendly nature of waterbased acrylics.

Research supported by USB at Print Recovery Concepts will investigate the utility of soybean oil in the inkjet market place. Inkjet for both commercial and consumer applications is one of the fastest growing ink markets.

Issues Affecting Commercial Success
Industry scientists and engineers are rapidly moving toward solving major issues for soy-derived, water-based coatings – hydrolytic stability (shelf life) and yellowing – as well as customer satisfaction in ease of application, speed of drying of finished product, cleanup, etc. All of these critical issues are addressed on a daily basis through  communication among technical and marketing people. Coating TAP meetings enable scientists and marketers to prioritize and plan for solving industry problems, which contributes to reversing the downward trend of soy-based polymer use in architectural paints.

TAP members were advised that, due to cutbacks in industry labs, evaluations of  experimental products are moving in a new direction. Coating companies are advising suppliers to furnish samples in the “formulated state” – meaning the preparation
of a ready-to-use paint rather than a basic resin. This places additional responsibilities on the principal investigators who direct the research. Because of this trend, more emphasis will be placed upon principal investigators with extensive labs and who partner with a willing coatings manufacturer that clearly defines its needs.

More and more emphasis is being placed upon zero/low-VOC paints as odor and toxicity become problems in institutional and retail markets. The Sherwin-Williams project is expected to deliver one of the user-friendliest coatings in the marketplace. There is a great interest in sustainable technology in coatings, and soy is expected to play a large role in resolving this issue.