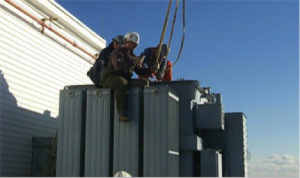 The huge rusting radiators of the 16 transformers at the Lamberts Point Deperming Station were replaced with new stainless steel ones. A total of 6,000 gallons of mineral oil was removed and replaced with biobased Envirotemp® FR3® transformer coolant fluid.

Dozens of U.S. military facilities have switched to or installed new equipment that comes with a biobased transformer coolant fluid-Envirotemp® FR3®. The world’s largest naval station — Naval Station Norfolk — is one such facility that has switched to the product made from soybean oil because it is better for the environment. Because the Station is located on a peninsula and its transformers are located on a waterway, personnel were concerned about the environmental impact if a transformer should leak. As a result, they sought a solution that would not harm marine life. Because FR3 fluid is soy-based and does not contain petroleum hydrocarbons, silicones or halogens, it typically biodegrades quickly in case of leak or spill. Tests show that FR3 fluid is 99 percent degraded in 21 days when tested per an Environmental Protection Agency method. In comparison, mineral oil is only 25 percent degraded in 21 days. In addition, the biobased fluid is considered non-toxic when evaluated by multiple standard test methods.