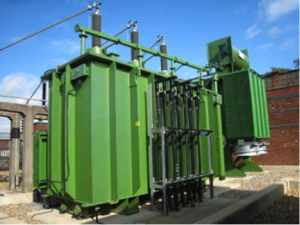 High-voltage electric transformers require an insulating fluid to prevent short circuiting and provide cooling. Polychlorinated biphenyls (PCBs) were used as transformer fluids until they were banned in the 1970s, when mineral oil became the primary replacement. However, mineral oil is flammable and may be toxic to fish.

With support from the United Soybean Board, Cargill, Inc. developed EnvirotempTM FR3TM dielectric fluid that is based on soybean oil instead of petroleum. The soy-based oil can be used to replace mineral oil when retrofilling transformers, which earned Cargill a 2013 Presidential Green Chemistry Award.

The FR3TM fluid is significantly less flammable than mineral oil, greatly reducing the risk of fire or explosion. The soy-based oil also increases the service life of the cellulose insulation five to eight times longer than mineral oil, which extends insulation life and transformer life.

According to a life cycle assessment using the Building for Environmental and Economic Sustainability (BEES®) 4.0 software, a transformer using FR3TM fluid has a lower carbon footprint across the entire life cycle of the transformer. The largest reductions occur in the raw-materials, manufacturing and transportation phases.

The total carbon footprint of an electric transformer is about 55-times lower when using FR3TM fluid compared with mineral oil. This is all in addition to the low toxicity, high biodegradability and the fact that FR3TM fluids are based on a renewable resource.

To date, there have been no known explosions or fires in the hundreds of thousands of transformers filled with FR3TM fluid since the product launched.

During the 18 years of the Presidential Green Chemistry Challenge program, the Environmental Protection Agency has received about 1,500 nominations and presented awards for 93 technologies. Winning technologies over the lifetime of the program are responsible for reducing the use or generation of more than 826 million pounds of hazardous chemicals, saving 21 billion gallons of water and eliminating the release of the equivalent of 7.8 billion pounds of carbon dioxide to the air.